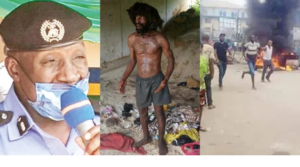 What do you think about this story?

In Ugheli North Local Government Area of Delta State on Thursday, a supposedly mad man was lynched, he was burnt to death because the people of the community suspected that he was a ritualist posing as a mad man.

Why did they think this you ask? Because according to the story, eye witnesses had seen the “mad man” using an expensive Android phone. But there’s more to the story and this story really has a lot of twists and turns so without further ado, let me start from the beginning and tell you everything that happened. 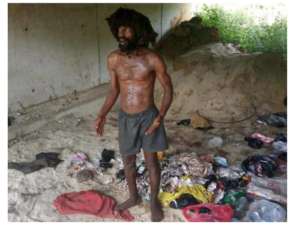 The whole ordeal started in front of a public primary school where a crowd of people were gathered to buy something from a trader. Amongst this sea of people was this mad man who drew suspicion to himself when he was spotted with an “expensive Android phone”.

The first thing people immediately started suspecting was that the man had stolen the phone from someone in the crowd. As one eye witness said:

At first, people thought that he stole the phone from somebody in the crowd, but when he started running and swallowed the SIM card, it became clear that he was not a mad man. He was caught and they began to beat him to get information from him.

You see, when people started to approach the mad man to inquire about the phone, he pulled the SIM card out from the phone, swallowed it, and began running away from the scene.

Why on earth did he do that? – I don’t know and that was the first question that caused me to raise an eyebrow. But the story gets worse.

After the mad man started running, he was caught and now, people in the crowd started to talk. Apparently, this was not the first time this man had been in this situation. According to an eye witness:

This same mad man was arrested about two weeks ago by the police after he performed the same act of swallowing a SIM card when he was caught discussing on the phone with someone about selling body parts.

The keke napep driver who was arrested along with the mad man at the time of his arrest those two weeks prior said about him:

When we got to the station, they discovered from bank messages on the phone that the suspect was having over N12m in his bank account.

Why does a mad man have N12 million in his bank account? – Second question that made me raise my second eyebrow.

On hearing the allegations against this mad man, the people of the community decided that if they handed the man over to the police, he would only be arrested then released again. They did not want that. So according to an eye witness:

On hearing that he was arrested and released, the mob got angry and set him ablaze immediately. 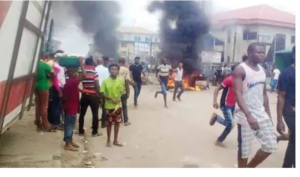 Then, and this is a very random and shocking twist to the story, another source then came out to say that the mad man was actually burnt alive not just because he was making a call with an expensive android phone, but also because – “a little boy and a sharp object kept in a sack was found in his possession.“

Now my mind is blown!

At first, like many people reading the headline, I too thought “Why would they kill a mad man because he owns an expensive phone. So a mad man cannot have expensive Android phone?” but now upon reading more things about the story especially:

I can begin to see why the people of Ugheli thought he was a ritualist. Still, I do not think that they should have taken laws into their own hands and burnt this man alive. I felt like they had enough evidence to bring this man to book the legal way. Why did they need to kill him by themselves in such a nasty way? I do not know.

But I’m very curious to see what YOU think. Please let me know what you think about this story by leaving a comment on my Facebook post. I’m so interested in hearing what you have to say about it so let me know.